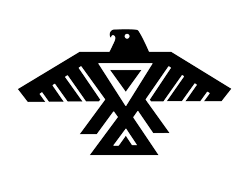 Ancestral history through oral tradition is an effective method for passing down knowledge from generation to generation in many cultures around the world. Transforming important lessons, dangers, and healthful knowledge into easy to remember stories using association techniques helps commit ideas to memory, making it less likely to be forgotten over long periods of time. North American Indian culture without doubt is a great example of this practice as evident in countless legends and mythologies.

One of the most famous Indian legends details a giant bird some believe might be a reference to a pterodactyl through many descriptions of the bird's prominent features and behaviors. Studying this legend further has brought an entirely different perspective, something that demonstrates the true nature of learning a valuable lesson, and passing it to others, as a warning of danger. In essence, this legend details a bird so powerful it can create thunderstorms as it moves throughout the sky. The Thunderbird is a spirit not to be reckoned with; Examining his origin story reveals an intriguing message carried on throughout the years.

It begins with two Indians traveling north to discover exactly where thunder comes from. They encounter a very high mountain with darting clefts closing in on each other rather quickly. One of the Indians, named Passamaquoddies, told the other to continue looking for the place thunder comes from if he didn't survive the cleft. Passamaquoddies passed over the cleft without a problem but his friend did not. He continued on his way, looking for the origin of thunder, and found a group of Indians playing a ball game. The group of Indians, perhaps startled, ran into their wigwams and came out with wings, equipped with bows and arrows, and flew south over the mountain. Passamaquoddies believed he found the Thunderbird's home, he confronted elders in the camp for help. They discussed how they may help and did so by placing Passamaquoddies in a giant mortar; crushing his bones into the shape of a Thunderbird, after which he was given wings, a bow, and arrows.