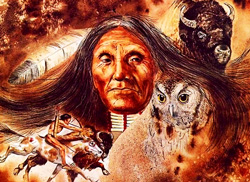 The elders told him fly away but not too close to trees as he would not survive. Passamaquoddies became the Thunderbird. He tried to leave and was confronted by Wochowsen (the Wind Blower and rival), who placed a strong wind in his path. Glooscap (the creator) seen this happening and broke Wochowsen's wings to halt the winds and let Passamaquoddies pass. After some time Glooscap noticed the broken wings of Wochowsen caused the air not to move, the waters to become stagnant, and the fish to die; So he repaired Wochowsen's wings just enough to moderate winds and bring life back to Wochowsen's people.

Tracing elements of this creation legend brought about interesting details which paint an alternative meaning to the story, providing practical reasons for why this myth is important to the respective people; A few key details here help build a more accurate purpose. Traditional Indian beliefs cite that spirits fly close to heavens with the gods in the form of birds. Wigwams, referred to by Passamaquoddies, are traditionally found in the American Northeast which helps narrow down a location to where the event described might have taken place. The next clue is in the reference of Glooscap, known as The Creator to the Penobscot Nation, who live in the American Northeast in Maine and New Brunswick. Searching the Appalachians in the Northeast area between Maine and New Brunswick brings us to Mount Katahdin. This mountain was named by the Penobscot Indians, meaning The Greatest Mountain.

One summit to Mount Katahdin, called the Knife's Edge, is a more dangerous travel point along the Appalachians with a 483 meter long section only 3 foot wide between steep drop-offs on each side. Perhaps this is where Passamaquoddies and his friend ventured to find clefts quickly closing in the search for the source of thunder. If this is the case, the legend of the Thunderbird might have an entirely different meaning altogether. The story could translate to this - An Indian and his friend traveling into the dangerous mountains during a windy period; Passamaquoddies made it back home after the wind finally calmed down, after seeing the place where Thunderbirds live, but without his friend. The elders question his actions. He explains the journey to the top of the mountain, that he found the place of the spirits, and wished to find the source of thunder.

Elders debate Passamaquoddies' wish carefully and eventually granted bravery by giving him death, so that he may fly with the other spirits to find thunder's origin. It's quite possible Passamaquoddies requested this in order to avenge his friend's death, and to warn others about dangers of the mountain for generations to come. If this is the case, then the story of the Thunderbird becomes a myth with a much deeper meaning, transformed into a legend for future generations of Penobscot Indians to hold close in their hearts by oral tradition.