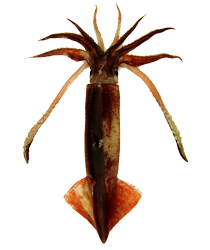 Giant or colossal cephalopods have commonalities with their smaller, more common cousins, such as an ability to hunt using bioluminescence; Similar to shining a flashlight at the surface of a lake or to attract fish at night when recreational fishing. The idea of bioluminescence in massive creatures may partially explain some sightings of USO's or Unidentified Submersible Objects. When a giant squid rises to the surface at night for feeding, using bioluminescence, it's quite possible eyewitnesses might mistake it for something otherworldly.

An onlooker may only see the glowing light and a faint outline of the figure creating it, not being able to make heads or tails out of what they were looking at. Squid generally feed at night, sometimes running along the surface a few meters down, and might be attracted to lights on the boat or certain frequencies of sound emitting from the engine. It also explains why fishing sonar might pickup very large pings as described in some USO reports. However, the only known squid to actually breach the surface and fly as USO encounters claim unidentified ships do, is the Japanese Flying Squid, which is much too small to match up with most USO reports. Although there are plenty of USO sightings to form plausible explanation(s), the hard evidence science requires is often lacking to help corroborate eyewitness stories.

On the controversy, sometimes plenty of tangible samples aren't even enough for positive identification. Strange biological matter found around the world washes up on ocean shorelines regularly with a significant portion of the incidents remaining unidentifiable. These blobs of organic goo, Globsters as they've been titled, can be a disturbing sight and seem to fit science fiction more than any sort of real life scenario; Fortunately for most encounters the blob is not alive and is not trying to gorge on everything in its path. Globsters are difficult to identify at first because they appear as a mess of organic matter somewhat resembling a creature.