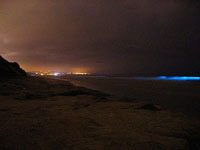 Gaining similar popular culture momentum compared to unknown flying object sightings are USO, or unidentified submerged object sightings. Submersible reports share common elements as strict UFO cases, yet they usually involve at least one state when the object is submerged in water, or cresting the surface and then flying. One of the more famous sightings was reported by Columbus during the voyage to North America. The crew and himself claimed see a glowing, pulsing, ball of light leave from beneath the ocean's surface and jet away through the sky. The report ends up being so astonishing to the expedition team, news travels back home where Columbus is tried in court - Not for seeing or reporting a strange unexplained USO, but for describing it to be similar to the Menorah. For the time being, the 15th century Columbus report seems to be as ancient as USO cases get.

Submerged object sightings have sometimes been attributed to existing oceanic phenomena such as the Bermuda Triangle, even so far as to claim the existence of an alien base lurking deep below the sea. Theories attempting to explain USO sightings range from bio-luminescent sea creatures like giant squid, to astronomical phenomenon and ball-lightning, yet they usually don't always mesh with a multitude of case reports. USO's are known to seamlessly transition from water to air without creating a splash or noticeable break in water tension. Also, the objects are sometimes witnessed at the top of a waterspout. Though speculative, ideas as to the purpose of these mysterious objects and exactly what they're doing include harvesting hydrogen-based fuel or traveling to or from an underwater base. There are thousands of cases from the sea, air, and land from credible sources which builds an idea that sightings are in direct relation to unidentified submersible sightings. The vast majority of unexplained flying objects are witnessed over land, but perhaps this is because people generally spend more time on land than they do on sea, and it's probable UFO sightings over water are scarce in comparison for this reason.