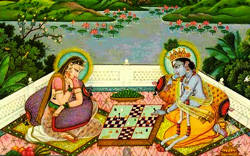 The path to enlightenment. Chaturanga, the earliest assumed known form of Chess was invented in the 6th century CE, in India after a battle formation found in the Mahabharata, well before it's modern counterpart found life in Europe. The game is played on a board named Ashtapada, dating well before the 6th century as a dice game, which is cited by the Vinayapitaka and Suyagadamga texts as a game Buddha must keep his distance from. It's believed these dice games, as well as Chaturanga, could inspire violent behavior in turn leading Buddha away from the path to enlightenment. Rightfully so, considering the game strategy in Chess relies on defeating your opponents in a controlled battle as originally intended.

No doubt the losing side wouldn't be too pleased if they lost their army and the same goes for anyone gambling on the earlier dice versions. The point however is nestled behind war strategies in making a series of moves contingent on each other, a practical example of cause and effect. Game theory is a way of taking a seemingly chaotic mess and turning it into an advantage by defeating the enemy in small consequential steps at a time. It's an appropriate method in the context of battle, especially when it allows an opponent with less resources to overcome the odds with a great game plan.