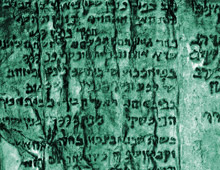 Discovered with the Dead Sea Scrolls is a peculiar artifact which some archaeologists believe to be guide map to lost treasure somewhere in the Qumran area. The artifact, known as the Qumran copper scroll, stands out from other scrolls since it's made of metal instead of a papyrus or paper. Copper use at the time of the scroll's creation was uncommon and a sheet like this is rare and valuable; likely sourced by someone with substantial wealth.

Studying the copper scroll in detail reveals even further questions. Researchers find the copper metal in a very pure form, in fact nearly 99% pure. There are inscriptions which give specific locations where large amounts of gold and silver were buried. Some believe the scroll is an ancient urban legend with no real proof any such treasure existed. Artifacts, gold, or silver described in the text haven't been discovered. This means the treasures might still be out there or it was found long ago prior to discovery.

Why would a religious sect in association with the Dead Sea Scrolls, who believed in remaining poor, have any interest in lost treasure? It tends to make sense that destroying directions after treasure is buried would remain true to tradition with respect to removing the temptation altogether; then why have the directions in the first place? Perhaps it's possible the copper scroll, and the Dead Sea scrolls, were not hidden by the sect and instead by another group altogether.