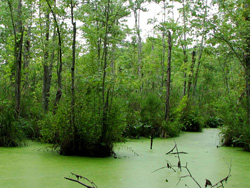 This might even be a contributing factor to explaining how at least thirteen witnesses in 1988 claimed they observed a lizard humanoid creature in South Carolina, around Browntown Road in Lee County. Christopher Davis first reported an encounter with the creature which lead to other eyewitnesses stepping forward with closely related stories.

A few years earlier, in 1982, Wes Craven's Swamp Thing was released in theaters; Entirely filmed in Charleston South Carolina 128 miles south of, yes - Lee County. The sequel, Return of Swamp Thing, was filmed to the west in Savannah Georgia and released in 1989, one year after sightings were officially reported. Is it possible that movie cast and crew were trekking through the swamps for footage and went off-course at some point, perhaps passing by not far from Browntown Road, a two hour drive from Charleston? Could it be that as other witnesses waited to come forward, Christopher did the same, after they accidentally stumbled upon filming for either one of the Swamp Thing movies toward the south and west?

We know it's easy to get turned around in lush areas of thick swamp lands; Over time trees and waterways can become disorientating and begin to look similar in every direction. Imagine trying to film it or follow acting scripts of a movie during the trek. Maybe the Lizard Man of South Carolina is a case of mistaken identity in this sense, or one intentionally influenced by entertainment media in a more obfuscated fashion. A failed publicity stunt in attempt to generate hype if indeed the sightings around Browntown were an attempt to stir public controversy. Instead they became local legend even after Christopher became nationally famous, hardly impacting the box office. The Lizard-man might really be a true cryptid, and just a mere coincidence that Swamp Thing movies were filmed in the same area. However, without any eyewitness reports in the past 24 years since the second release of the movie, it seems highly unlikely.