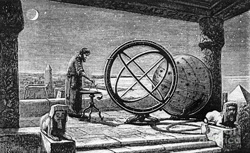 Looking far into the distance proved to be a valuable asset to 17th century armies for gathering real-time intelligence without tipping off the enemy. Ship captains found themselves in distinct advantage with the help of a looking glass to find land, spot bad weather, or discover other vessels lurking in the vicinity. In the midst of the turmoils of war, Galileo turned a primitive telescope toward Earth's moon to discover a rocky surface covered in craters. The moment must have felt astonishing considering accepted beliefs in the 17th century stated the moon was smooth as seen by the naked eye on Earth. Galileo documented his observations in great detail and revolutionized scientific understanding of the cosmos.

Years later, Issac Newton refined the telescope to include a reflecting mirror with an eye-piece allowing a more comfortable method of viewing while removing chromatic aberration color distortions from the image. Over time the size of image magnifications increased exponentially with larger telescopes, creating a whole new untapped method of discovery. Some scientists began frantically searching the night sky while a few turned magnification into a revolutionary way of looking inward.