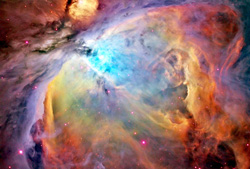 An experiment in the late 1970's helped bolster revolutionary views of Einstein's principal theories in physics by examining the path of a photon through a double-slit apparatus. According to Einstein, light exists as both a wave and particle at the same moment in time. In 1978, John Wheeler set out to determine the state of a photon during an observation process, be it a wave or a particle, influenced by human thought. The basic idea is that if an observer knows which slit the photon would travel through, predicting its path, it remains in the particle state.

If an observer was unaware of the possible outcome, the photon would turn enter a wave state, capable of affecting its own path. Wheeler proved in these thought experiments a strange property of physics whereby light is seemingly capable of affecting itself in the past, from a future state. Further studies by colleagues after Wheeler's demonstrations eventually confirmed his findings. In theory these delayed choice experiments reaffirm particles can exist in two states at once which can be influenced through observation. The idea also purposes an enhanced capability of human subconscious or an altered state of which it can exist. A specific distraction to our consciousness allows the subconscious to act through itself without preconceived influence or notion, thus allowing subconscious to manifest its own acceptable realities or dimensions.

Sounds quite complicated really. What it seems to indicate is the human mind may very well be capable of influencing past realities simply by the nature of its mechanism. Quantum physics suggests the past, present and future all coexist, and that affecting any state of time will equally affect the others. Humans know premeditated choices of the present can change the future, changing the past incidentally once the chosen future has passed. What's yet to be proven by physics is whether or not we are capable of modifying past events from the present state even though theory suggests it to be true. Perhaps it requires a long series of micro adjustments to build one larger past observed by all conscious histories - If enough people believe, will it happen?

The idea behind the theory of past, present and future all existing at the same moment in time has further plausibility when combined with multiverse theory, or the theory of multiple coexisting universes. Pictured like the layers of geologic sediment buildup over thousands of years in cross-section, parallel universes are stacked like pancakes, with one above the other. Presume in the multiverse, there are three core universes, one for each past, present and future. They exist at the same moment in time relative to the observer. Meaning that if mankind can traverse between the universes then it also means crossing through points in time and experiencing different timelines of life. Consider the concept of wormholes, how bending space creates a shortcut through not only space, but also through timelines. Then, there is another way of finding alien life in our universe, by exploring alternate universes and quantum dimensions.