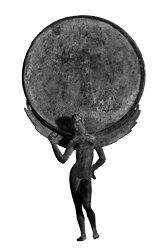 The belief of a broken mirror resulting in seven years of bad luck is most likely one of the most well known superstitions in the world. Just hearing the phrase makes anyone take a little extra care while moving and hanging mirrors. For many thousands of years people relied on highly polished metals as a reflective surface which held multiple purposes in daily life such as applying makeup, redirecting light, or even starting fires by focusing light into a fine point.

When the Romans created glass mirrors with a thin metal backing which are easier to shatter, mirror superstitions really went into overdrive. Cultures during the period considered any images seen in mirrors otherworldly and believed those images represented souls captured in another realm or dimension like the Estruscan mirror for example. If the mirror broke while someone was looking into it, the soul became trapped in many pieces, requiring either every single piece of the mirror to be ground into a fine dust or face seven years of bad luck while allowing the soul to mend.

A soul is a direct reflection of who a person is; It's the light within and an energy binding life to their existence. What's very interesting about mirrors and bad luck stories is how believers refer to the soul becoming trapped inside another realm or dimension, almost alluding to a specific method for interacting or communicating with an alternate dimension. If it's true, that a broken mirror with a captured soul really does affect its reflective world physically, then it makes sense to have some sort of existing dimensional connection in order this to happen.

Broken mirrors are one well known superstition and there are many others. In fact, a good percentage of people around the world subject themselves to superstitions on a regular basis. This is the result of a conditioned response though subtle and probably without a second thought at the time. For example, if a sequence of desired events or outcomes unfold consistently and coincidental to a behavioral habit, the brain response may wire itself for the association. In a real world scenario, suppose a person tells themselves a traffic light will turn green if they tap lightly on the right side of the steering wheel three times while slowing down for the red and the light turns green, this may invoke a conditioned belief should it repeat many times. In a way this is much similar to Pavlov's law of temporal contiguity.

Another well-known superstition, Friday the 13th, is actually the result of a traumatic event in the 14th century. Under the reign of King Philip IV, the Knights Templar organization faced ostracization for refusing to contribute more wealth to the king's debts. Grand Master of the Knights Templar, Jaques Molay, was arrested and put to death on Friday the 13th of October, referred to as Sion 1307 today. Philip's actions and persecution of the Templar proceeded to take place when the calendar lined up with a 13 on Friday. For many years the association transformed the date occurrence with bad luck to be a Knights Templar on that day.

Similar to behavioral responses, superstitions could manifest in similar ways, and suggest a great force beyond the known realm is at work. Consider a larger situation where many thousands or millions of people share in a common behavioral response condition then the context of that condition may easily become part of folklore and legend. Like a black cat crossing someone's path or walking under a ladder resulting in a string of unfortunate bad luck, the association is made, and a conditioned response results if it happens one too many times.

Consider those types of conditioned responses in relation to psychic ability. Some clairvoyants adapt seamlessly to idiosyncrasies and are able to use high probability outcomes to facilitate their trade. Looking at it this way demonstrates how psychics could leverage predictive human behavior in fortune telling and foreseeing future events. When the medium is able to establish an association between a person's behavioral habits and a series of events, they may be able to convince the person of their future as the pattern continues. The further thought here is that maybe it's possible the orchestration of fortune telling actually creates coincidental context well enough a person subconsciously fulfills the prophecy as a matter of conditioned response.