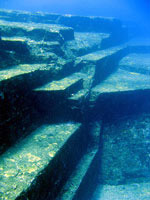 Off the coast of Yonaguni Island, Japan, resides a most impressive underwater structure with staircases and sharp-cornered flat terraces believed to be ancient sunken cities. Debate has been going on as to whether or not the massive structure is man-made or formed from natural processes on the slate rock. Several features including what appears to be a piece of Kaida script have been discovered so far, but the carbon dating seems to put the structure at a time possibly around 1,000 BCE when the sea level closely resembled that of today. An original estimate dated the site to 8,000 BCE at a time when it would've been above water. Though debates suggest Yonaguni to be a natural formation, those same geologists believe that its quite possible that it may have been modified by humans in the past. The problem with a natural erosive process at Yonaguni is that no fragments have been found supporting the theory.

Nearly 300 miles away in Okinawa, distinctly impressive step-like pyramids were discovered further bolstering the idea of human intervention at the Yonaguni site. This area is undoubtedly man-made with features such as archways, 90° corners, ceremonial flat terraced platforms, stone circles and hexagonal columns. Both sites can be found in comparable depth close to 100 ft. below the ocean's surface. Current theories suggest the Okinawa site as similar to a castle wall coherent in architecture to nearby locations whereas the Yonaguni site might be more of a ceremonial platform. Much of the world's vast oceans are largely unexplored, and to find sunken ruins is an achievement in itself. Understanding lost cities such as those potentially in Okinawa may one day change history as we know it, and help to propel mankind into further deep water excavations.