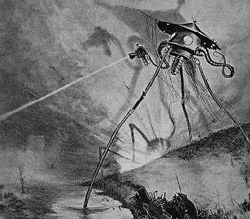 In 1955, an officer from Loveland Ohio was interviewed after facing public pressure. The officer released a story stating a witness businessman did not actually see lizard people, pronouncing instead the unidentified animals were likely someone's escaped pets. Spun out of control by the media, the officer claimed while recounting previous testimony. Given the time frame of this reported encounter, it's quite possible there might have been outside factors which caused news media or the businessman to react as they did. Sequels to the recent 1954 Godzilla release were showing in theaters around this time, along with a booming Sci-Fi following, suggesting a possible seed influence.

Movies of the era sparked the imaginations of many, perhaps just enough that some people might believe these monsters are lurking in unknown shadowy areas of real life. Unfortunately, a single documented case by public officials isn't really sufficient claim to believe people genuinely were seeing lizard humanoids in Ohio. The media may have truly tried to draw attention to themselves over a benign event, or it could be simply a case of new entertainment affecting the general public.

A similar hysteria happened in 1938 on a much larger scale when Orson Welles presented War of the Worlds as a series of radio broadcasts. His news bulletin style show presented enough details to cause a few people to actually believe Earth was being invaded by aliens at those very moments. Orson's broadcast was a lesson well learned. Along with World War II stress, it caused panic that may have been exemplified as newspapers seemed to feel threatened by a new age radio medium. Whether or not the general public realized War of the Worlds was fictional, it was told in such a way to create a large scale public reaction. From this it's suffice to say that entertainment media is capable of influencing what people believe, and in some cases enough to alter their public behaviors.