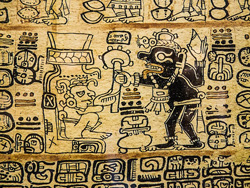 Studies of ancient civilizations tend to point toward a common inclusion of natural substances specifically formulated for ritualistic purpose. Sensory deprivation or overload may aid subjects in meditation for spiritual awakening while acting as a metaphysical bridge from human consciousness to deities. Rhythmic practices often accompany the rituals as a means of unlocking access to the depths of the mind while aligning circadian timing in a trance-like state.

A principal example of this practice is Shamanism, though it may be identified by other names depending on the culture. Traditionally, Shamanism finds its home in South America where the Moche, Nazca, Inca, Maya, Olmec and Aztec participated in rituals involving cactus to induce visions; though Shaman are not exclusive to the area. Variations of medicine man healers are found throughout the world from Asia to Africa to North America.

The idea of a spiritual healer, or medicine man, is a common belief for many ancient cultures and several of those traditions are still practiced to this day. A shaman is capable of communicating with the spirit world in order to diagnose major illnesses and other ailments while maintaining the belief of an interconnected living universe, accessible by metaphysical journeys into the subconscious.

Shaman may heal the mind and help others reach states of higher consciousness through ritual. In various cultures, this journey is also referred to as a rite of passage, whereby a person may pass into adulthood upon completion. Whether it's spending hours and days walking endless dark tunnels before finding a lit statue of a god, or breaking pottery with rhythmic cadence along long walks at night, the practice does reveal one key aspect from culture to culture. The ability to block the outside world from view long enough to allow one's mind to manifest uninfluenced thought.