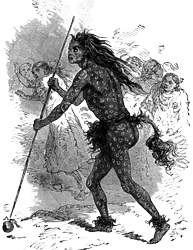 Some say the Sea Monster of Cape Ann fits in this category, that early reports from the 17th century were likely identifications of a more common animal embellished to fit the tales of Massachusetts explorers. Even though skeptics are quick to dismiss Cape Ann monster accounts, they don't seem to have a retort for a similar monster appearing in Wampanoag Indian mythology as the Horned Serpent. Two Indians were along with Englishmen according to John Josselyn's report from a journey off the coast of New England, two Indians who convinced the English not to attempt killing the sea serpent they witnessed. Rightfully so, considering cultural beliefs of the Wampanoag view the Horned Serpent in association with Hobbomock, the destructive spirit of death. If it were not killed outright, Hobbomock will have his vengeance. From this we know the Cape Ann monster was not first discovered by Josselyn. Despite these problems we still sometimes discover stories from the past that are very compelling with so many unique aspects the legends slowly begin to corroborate themselves.

The Nessie of America, some might say, is in many ways similar to the mysterious creature causing a ruckus every so often in Loch Ness, Scotland. Big Rem, or Champ, is a theorized plesiosaur residing in a deep freshwater lake running along the New York, Vermont state line called Lake Champlain. Fossil record indicates Champlain was once a salt water glacial lake, aptly named Lake Vermont, which drained very quickly by a failing ice dam around 12,000 years ago, creating a flood of Biblical proportion and turning it into a body of water known as the Champlain Sea - An inlet connected directly to the Atlantic Ocean.

It's possible Champ became trapped in the Champlain area when the ice dam broke like a minnow in a giant beach puddle, retaining habitat in the newly formed Champlain Sea even beyond the time of its recession around 10,000 years ago. Alternatively, and like Nessie, it's also possible Champ survived for millions of years in the deep ocean and found its way to Lake Champlain after it was formed well after the the ice dam broke and sea retreated.