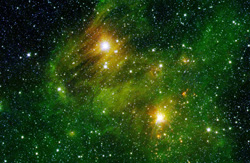 It's an honor to have energetic creatures of such astounding significance as part of the enormous collective of life on Earth coexisting with mankind. The presence of unexplained beings here in spirit, even if mainstream science may not have evidence of their existence, is indeed a privilege to witness. From documented animals and plants covering the planet to unknown conjured manifestations of imagination, energy demonstrates many shapes and forms even beyond comprehension.

However, legends of mankind demonstrate a deeper, unparalleled connectivity with life beyond simplistic psychologies of creating stories. Human life swirled into existence on Earth of all places in the universe and, along with it came the fantastic notion of consciousness. In principal, all life on this planet with or without proven consciousness, shares a root commonality in the fact life is specifically here, at this point in the universe; A presumably rare inhabitable paradise teaming with fresh oxygen, liquid water, and abundant food resources. As far as we know Earth is life's tropical paradise of the known universe, not only because of the multifarious examples of how life can exist, but also because the multiplicity exists in a most ideal location.

The curious bit though, is that life on this planet has found ways to survive for millions of years. Life surpassed multiple global extinction events just like the one responsible for wiping out the dinosaurs. Forms of life are able to withstand harsh environments previously though inconceivable. It is almost as though life is meant to exist as a part of the universe, not as an unintended creation. Even if humans are recent on the geological timeline of the planet, other life has existed long before mankind, perhaps as a form of expression of energy which is designed to exist.