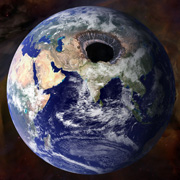 Hollow Earth theory proposes the Earth, and other planets throughout the universe, might have hollow cores. This concept primarily focuses around entrance points at the magnetic poles along with alternative entrance routes, back doors if you will, accessible from various points on the Earth's surface including entryways below the Great Pyramid, Mayan ruins, and more.

Science theorizes the Earth's core is actually liquid magma based on seismic wave density research, and that in order for the planet's magnetic field to exist, the core must be liquid state metal at high pressures.

The closest suggestion to any type of void in the center of the Earth is a light element, presumably oxygen or sulfur, composing around ten percent of the mass according to Geophysicists. Pointing a finger at the Earth's core may not necessarily provide accurate disprovable evidence of Hollow Earth theory in the sense that claimants could be referring to a hollow area somewhere between the 1,800 miles from Earth's crust to the outer core. The problem, however, are theorized estimates of average temperatures ranging from 1,000 to 3,700 degrees Celsius due to conductive heat transfer from the liquid center.

Cavern systems found throughout the world support the idea of hollow structures residing below the Earth's surface, but due to the increasing temperature the deeper you go, the safe habitable zone falls near ~1. 16 miles (1867 meter) deep where temperatures average around 90 degrees Fahrenheit in non-geothermal active areas. Part of scientific theory has been proven already in the world's deepest mines, located in South Africa, reaching in excess of 3,500 meters with hopes of reaching the 5,000 meter mark in the future.

In these mining areas special cooling equipment is required to combat temperatures upward of 70 degrees Celsius and miners also deal with increased pressures capable of causing rocks to sometimes explode as they're lifted to lower pressure areas. The Earth's geological composition makes it difficult to entertain the idea of a hollow Earth, let alone life other than microbes thriving at such temperatures, but it does not rule out the possibility of vast hollows occupying the safe zone within the crust. The world's deepest known cave, Krubera, has been successfully explored up to a depth of nearly 2,200 meters. Close competitors include Cehi 2, Sima de la Cornisa, Pantjukhina, Sarma, Torca del Cerro, Jean Bernard, Vogelshacht, Gouffre Mirolda, and Mezhonnogo, all range from 1,500 to over 1,700 meters deep.