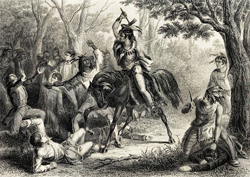 Warning of danger sometimes proves to be futile like recounting a story of the boy who cried wolf. Ideas of pleasantries might need to be saved as attribution to an eventual outcome as opposed to the controversial history of a small town called Point Pleasant once burdened by a similar tale. Long before the Silver Bridge collapse and paranormal events leading to it, Point Pleasant was Fort Randolph, site of the first engagement of the American Revolution. Two rivers meet at this sublime point, the Kanawha and Ohio. Kanawha River became known by multiple names as fights emerged over disputed territory.

The French attempted to capture Fort Randolph without success, naming the river Tchadakoin. Preceding the Battle of Point Pleasant, the Iroquois aptly named these two rivers, Chautauqua, referring appropriately as two moccasins tied together. It was the Iroquois land, to the south and east of the Ohio river signed over to the English, as responsible for initial conflict between English settlers and the Mingo, and a few Delaware Indians.

The Mingo were known at the time for being controversial and feisty, they tried pushing English settlers off Indian land, to the other side of the Appalachians. Shawnee Chief Cornstalk attempted to procure peace after leading his people into a strong English resistance ending in stalemate. Very few Shawnee tribe members were in agreement with Mingo and Delaware actions but followed Cornstalk into battle. According to record, the Chief was killed by an English soldier on his way to peace talks and buried on site. Legend claims Cornstalk uttered the words of an everlasting curse of the Great Spirit on the area during his last dying breaths, which some believe is the true reason for strange events happening in Point Pleasant since.