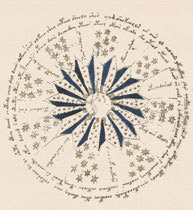 Composed of 240 vellum pages written in an undecipherable, unknown language, the Voynich Manuscript is quite perplexing and continues to intrigue theorists since its public release over 40 years ago. Confusion over the Voynich Manuscript has created several theories purposed by scientists of different disciplines.

To some, the medieval script resembles an East or Central Asia language in raw form, which is almost instantly noticeable by looking at similarities in symbolism. Historic record gives some indication that the language might have been invented for the purpose of the book or a series of related texts, as several explorers from East Asia were known to have an invented alphabet of a sort. Some researchers also suggest the book to be a cipher with symbols introduced into hide information.

Interestingly, the manuscript carbon dates (by vellum) to roughly between 1400 and 1440, not too long before ciphers were gaining popularity in Europe. There are at least ten major theories with scientific merit to what the manuscript might be, but an actual translation remains unknown.

Aside from the unknown language found throughout the script, there are illustrations also adding to the mystery. The drawings are believed to section the book into various parts including plant life, astronomy, biology, cosmology, and recipes. Interpretation of a few of the drawings appearing to be plant related seem to demonstrate splicing combinations, or hybrids with the leaves of one plant along with the roots of another, and flowers from yet another. A theory by William Newbold states the circular shaped drawings look like cross-sections of the plants which could only be witnessed by looking at them under a microscope. Although his theory was dismissed for speculation, looking at the drawings for a brief moment could easily give one the idea they might be cross-sectional diagrams.

Controversy surrounding the Voynich Manuscript resulted in accusations claiming the book to be a hoax. This was based solely on a statement that if there is no decipherable information there must be no information at all. By far the strongest evidence the medieval script is not a hoax (at least by modern times) is the vellum's carbon date result. Next, the script is considered to be far too sophisticated when compared to other hoaxes during the same period. Interpretation of the illustrations alone have provided insight and clues toward understanding the text written alongside. Painting the overall picture possibly as a guide to plants, plant remedies, and their cycles with close relation to the stars. The concept is not unreasonable by any means to hunter-gatherers, and it's repeated on countless occasions throughout history. Of course, there is the possibility the script may translate to something divine in purpose, relating the heavens above to the Earth.