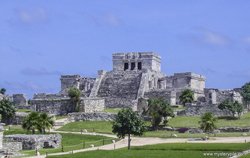 On the east coast of Mexico's Yucatán peninsula resides the great and mysterious ancient Mayan outpost of Tulum, formally known as Zama. From early in the 13th century to the mid 1500's, goods from inland were transported here and traded with those arriving by sea. Modern theories suggest the prominent central Castillo structure acted as a lighthouse beacon to direct canoes and ships to safety past a potentially dangerous coral reef just off-shore. Two windows in the Castillo face the sea, one is perfectly square, the other a vertical rectangle. During sunset to the west, these windows light up one at a time depending on a traveler's location near the reef. Fires lit inside the windows may take place of the sun at night, then during the day time it's possible to see a person or colored fabric from a distance on the Caribbean sea. The Castillo once utilized as a lighthouse is one plausible explanation as to its purpose, but perhaps it was also utilized for other, more divine scenarios.

At least 60 Mayan ruins can be found throughout the ancient city which is fortified by three walls, two watchtowers, and a 12 meter Caribbean Sea cliff-side. Among the structures we find Temples of the Wind (Templo Dios del Viento), Diving god (Templo del Dios Descendente), of the Frescoes, and Initial Series. Houses of the Platforms, Halach Uinik, Columns, Chultun, and of the Cenote. Then as mentioned before, El Castillo built using unique elements of traditional Mayan step pyramid architecture. Researchers believe Tulum is a very important site in Mayan history for the worship of the Descending god Kukulcan, otherwise known as the Feathered Serpent, Quetzalcoatl to the Aztecs. According to Joseph Smith, Zama is also known as the City of Zion. He claimed this before any modern excavations of the site, during a period when Tulum could only be seen peaking out of the tops of palm trees. Artwork reliefs and symbols throughout depict scenarios closely resembling those found in the Paris Codex - and also in the Bible. Some of the paintings in particular appear to tell the story of death and resurrection of Jesus. Another unanswered mystery about Tulum is the presence of ancient stele, one dating to around 564 CE, nearly 700 years before construction began on the fort. Two theories give ideas to how this might be possible logically, either the stele was brought later or the city was rebuilt on several occasions up until its abandonment during Spanish invasions.