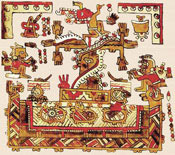 Ancient civilizations around the world share similar creation stories including an important form known as the Tree of Life. What exactly is the meaning? Certain cultures envision the tree of life to exhibit a flow of creation, from the divine to Earth and back, while others simply see it as directions for travel to the heavens. Perhaps the apprentice pillar is an example of this flow. Further beliefs state representation of different levels of consciousness, and how our subjective experiences travel along different paths. However the tree of life is interpreted, the fundamental principles seem to remain consistent. The design is considered to be one of the most recognizable, and most scared shapes in sacred geometry, believed as the key to all of creation.

Modern science uses multiple forms to identify and organize elements of several disciplines, usually in the form of a branching tree as a basis to demonstrate the process of evolution, classify animals, and structuring geological matter. Genealogy utilizes the concept to trace and diagram human relatives back to our ancient ancestors. Versions of the Caduceus and Rod of Asclepius symbolized in medicine reflect a serpent coiled around the tree of life. Biology adapts a form in Phylogenetics to construct an evolutionary tree relating various groups of organisms together. Regardless of how a diagram or symbol of life is applied to sciences, the design helps humanity visualize its synergy of relationships in a tangible form. Sometimes the symbol is associated with DNA structure as outer bands wrap around the core, condensing and protecting information stored inside. Our existence is one of life's greatest mysteries. The shape of a tree is very symbolic as it represents life from a single point growing from seed, rooting, and connecting deeply with the Earth while branching out and multiplying into the heavens. To know the tree of life physically is to understand a principal concept, life stems from itself, and we are the direct result of our ancestors. To know the tree of life spiritually is to understand our beliefs interconnect with our planet and its divinity.