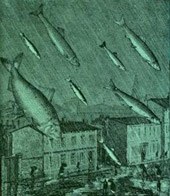 Throughout the ages, weather conditions have accounted for many strange phenomena that are steadily gaining acceptance as simply, natural processes. Due to complexity behind these strange mysteries, it's only suiting to have long investigations and mounds of intricate data necessary for any sort of explanation. Most research tends not to involve eye-witness accounts from the events, and scientists are left to base theories on messy puzzles left behind. The strange weather related phenomena found here has been studied and scrutinized by many scholars over the years, even in ancient times. Incredible captures such as a volcano blowing a smoke ring for the first time, or seeing evidence of electrically charged sprites in the upper atmosphere, suggest to us there is much more to learn about Mother Nature's unique abilities.

An English Latin dictionary dated to 1440CE is the first known written account of a substance referred to as Star Jelly, a gelatinous material discovered randomly on Earth's surface. Folklore at the time suggested slime was remnant of falling or shooting stars as no other explanation could be determined. Modern science has presented several new theories including animal byproduct, a type of algae, and even a dry material that becomes jelly-like when moisture is introduced. In fact, a similar process is used with some NASA space experiments, where dried microbes in suspended animation are sprinkled with a bit of water. There are known microbes that can be exposed to the vacuum of space directly in the suspended state and then be brought back to life with water in the lab. With star jelly though, testing done on a selection of specimens has yet to reveal any DNA material, furthering claims that it's not a living organism. Jelly-type substances are clues to what is possible, and if indeed a deposit from a space traveling rock, it sheds light to the idea of life on Earth originating from elsewhere.

Throughout the ages people have witnessed very odd and strange types of rainfall, slightly altering the perception of what reality might be. Aquatic animals such as fish and frogs have blanketed numerous landscapes in large quantities. Other accounts talk of large amounts of dried plant matter, flesh type material, and blood. The most common sensible explanation for this odd rain involves a weather system with high winds such as a tornado or waterspout sucking up a shallow body of water, animals and all, into the sky and ejecting the contents several miles away from the site. Blood rain reports have been identified to occur in areas (for the most part) where colored dust or fine organic material is absorbed by water which then condenses and falls in another location. Mysterious red rain in Kerala, for example, was discovered to be very similar to algae and fungal spores found in the area. Another example are the strange rains of Honduras lasting well over a century now to the point locals have created a folklore song called the Rain of Fish.