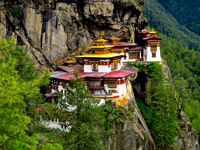 James Hilton wrote of a mystical place called Shangri' La in his 1933 book, the Lost Horizon. Described as a hidden utopia paradise, Shangri' La is an untouched world secretly located on Earth, away from the tainted common bustle of society. People who are fortunate to live in the harmony of the Himalayan Dream age very slowly and are forever happy with everything they could ever need and aspire to. The 1973 movie version of the book depicts a long and treacherous journey to find this hidden paradise on Earth. The High Lama's time could not last forever and his lessons give hope that one day we may all find our own Shangri La somewhere along the journey of life.

Many explorers over the years have attempted to locate Hilton's true paradise in the clouds, deep in the Himalayan mountains. In the Kingdom of Bhutan, a monastery tucked away well off major travel routes closely resembles descriptions in the Lost Horizon story, also found in the Himalayas. The beautiful monastery overlooks are breathtaking, and it's no wonder why people have inhabited the area for thousands of years. To find peace at the tops of mountains on the world's edge.

Artifacts and relics discovered in Bhutan date to around 2,000 BCE at a time well before myths of Shangri'La found their way into the mainstream. Perhaps this is where Hilton fostered the Himalayan Dream idea, based on the existence of monasteries built at high elevations in the Himalayas, far away from feuding nations, off the beaten path, and closer to identifying with nature on a purely spiritual level.