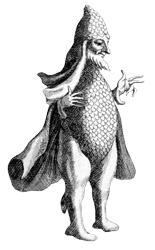 Legends of amphibious reptile monster encounters are traditionally entwined with swamps in North America, but then become seafaring as tales of hybrid human-fish creatures and strange sea anomalies are abundant with ship and sailing crews. Mermaids, Mermen, Sea monks, Siren, and Nymphs have all played significant roles in sea lore, sometimes saving ships from danger and at other times luring crews to their demise. One series of mermen stories provides insight into the perception of our ancient relatives when an animal living off the coast of Denmark is described to be a cross between a Fryer Monk and a fish. Sea Monks were depicted in the Book of Days as this literal representation and later became known as the giant squid thanks to the efforts of zoologist Japetus Steenstrup.

Other researchers believe these strange creatures found off Denmark were just misinterpreted sightings of walrus, sharks, or seals, although close examination of the drawings reveals the shape and characteristics of a giant squid to be more likely. To Cryptozoologists, there isn't always sufficient evidence to explain odd stories and legends from the past especially when a significant amount of time has lapsed.

The Sea Monk case clearly shows an example of how a few of our ancestors interpreted creatures never seen before. Instead of seeing these animals as a completely separate species of biological life, they instead focused on observed human-like qualities. Key features of 'curious fish' (giant squid) like the large eyes, tentacles, and head shape stood out from the distance enough to propose a theory; Be it one based on spiritual influence, along with enough detail for science to eventually come to a plausible and likely conclusion.