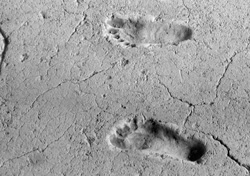 Quantum theories suggest energy is made of very small units with elementary particles which behave like particles and waves at the same instant. The particle movement appears completely random while very difficult to calculate. Incidentally, quantum theory also purposes that the past, present, and future coherently exist at the exact same moment in time. In other words, current actions of humans are directly affecting both the past, present, and future at the same time.

There are hundreds of spin-off theories from this master concept ranging from humans indirectly changing their past unknowingly on a subconscious level, by time machine devices, or through deep spiritual connectivity. Given the purposed theories, quantum physics suggests an explanation for strange artifacts discovered throughout the world.

This theory may also explain how ancient footprints were actually fossilized in stone millions of years before the oldest known ancestors of modern humans were thought to have lived; By a unknown type of subconscious connection. Current archaeological record indicates the oldest known footprints of a human ancestor date around 3.7 million years ago from a collection of eleven prints discovered in Laetoli, Tanzania. The oldest dinosaur footprints date roughly between 246-250 million years ago from an animal smaller than a house cat called the Spingopus. A discovery made in 1987 by Jerry McDonald tests theories stating that humans didn't live during the time of dinosaurs, and finding footprints almost four million years old are certainly steps in a different direction. The Late Cretaceous period ended around 65 million years ago and we know life is capable of surviving a mass extinction event. Current record does not show much in the way of dinosaurs in a traditional sense surviving past Late Cretaceous though we do know of very close relatives still living today.