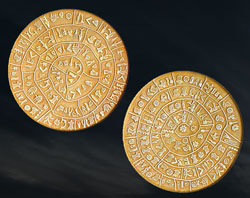 The ancient city of Phaistos found south-central on the island of Crete in Greece became media famous when the discovery of a hieroglyphic disc dating back to around 1700 BC were found. A total of 241 figures in 45 glyphs spiral around to the center for the disc. There are theories regarding the disc to be ranging from a farmer's almanac to a story of the human journey. Given the nature of the content found inscribed on the disc, a unified theory has not been decided upon.

Illustrations seem to point toward a type of astronomical calendar, or Epagomenen as known by the Egyptians. As the Minoan culture repeatedly used symbolism for the times of death and rebirth along the lines of Sacred Geometry, it is not out of the question to perceive the disc as a means of tracking the times of sacrificial days.

Further studies have revealed the possibility of the Phaistos Disc having a direct relations to Thoth, Isis and Osiris. Depictions of 12 ethereal pyramids around one, forming an hourglass and the illusion of time. Egypt's influence on Greece is well documented and profound to say the least. Thoth is known to have invented many arts and musical instruments in Greece with a primary responsibility of guiding souls of the dead across the winding waterway on his wings.