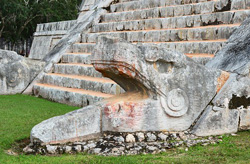 In many cases it's the artwork composition which appears to be purposefully arranged in such a fashion that lines of design and contrast differential draw the onlooker exactly to these points. If the artworks could be vocalized, hybrid animal heads would be screaming at the top of their lungs while detracting viewers from other parts of the composition; Precisely depicting a level of importance even beyond that of some of the pharaohs of the time. All hybrid beings share the same distinguished features as all animal life on the planet in the form of facial characteristics. Eyes, nose and mouth create the foundation. In essence, all walks of life are organized in a similar fashion which effectively triggers instinctual recognition upon sight.

Even modern hybridization depictions by the entertainment industry tends to be associated with super natural human abilities with distinct human-like facial qualities. Science understands facial recognition phenomena as a key survival trait not only for humans, but they have also found some animals exhibiting the same capability. Certain species of fish like the Foureye Butterflyfish for example, have color pigmentation in an eye shape near the tail fin believed to cause predatory confusion over which end should be attacked. Foureye predators usually target the eyes first, demonstrating a dependence on partial face recognition, and the Butterflyfish has developed an evolutionary trait to further its survival. This idea of a false eye plays on a phenomena known as Pareidolia, whereby significant meaning can be derived by viewing various forms and shapes resembling facial structure. Face perception is a rudimentary component for both human and animal life to a point which any hybrid concoction likely will mimic these characteristics.

Depictions of amalgamated humans have long been a part of our history and it seems the advent of modern technology is beginning to thrust this concept back into the mainstream once again. For hundreds of years half human creatures remained those of myth and ancient gods, but now machines and computers have effectively introduced a revolution of improvements to the human form. People have long been advocates of self-improvement on levels beyond natural ability, easily identified by looking at ancient uses of weapon technologies, as even a bow and arrow extends human ability to take life from a distance.