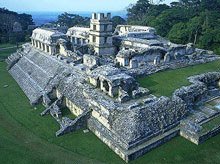 Observatory with removed roof (Fg. 3-13a)

Currently, only a very small amount of the Mayan city of Palenque is estimated to have been uncovered leaving much speculation over certain aspects of Mayan history. Theories suggest Palenque was a priestly center, arranged in an amphitheater style with one central pyramid. The small percentage of uncovered Palenque ruins include The Palace, the Tomb of Pakal inside the Temple of Inscriptions, Temple of the Skull (XII), Sun, Cross and Foliated Cross Temples, an aqueduct system that redirected flow of the Otulum River, and the Temple of the Lion. Over 1,500 ruins are estimated yet to be uncovered in the Palenque city area alone.

Mayan culture is renown for their celestial influence, mathematical ingenuity and their wonderfully large step pyramid constructions filled with intricate glyph carvings detailing their history, stories and legends. Adding to the complexity in which Mayans built with, many of the temples and other structures are aligned specifically to astronomical events and celestial configurations. The Mayan Calendar, a large circular stone covered with ornate detail further exemplifies an impact of cosmology on the culture.

Recently the calendar has sparked a lot of speculation due to its perceived 5,000 year cycle projected to end on December twenty-first, 2012. Theories explaining what happens on this date ranged from a doomsday apocalypse to the coming of a new age, until the day on Gregorian calendars came and went without anything major happening to the world in terms of a catastrophic event. Since then, the Mayan calendar has not made major headlines or focus of doomsday prophecies in quite the same way.

So far, only one unique structure has been uncovered in the Palace area which is unmistakably an astronomical observatory. In demonstration of ancient Mayan architectural ability and sophisticated celestial knowledge, this four story tower lines the setting sun of the winter solstice to the center of the Temple of Inscriptions. The entire city of Chichen Itza is aligned precise to the points on a compass, furthermore, the Pyramid of Kukulkan creates the illusion of a snake moving down the pyramid in the direction of a cenote during the days of both the autumn and spring equinox. 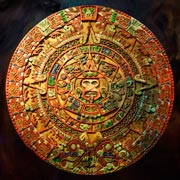 As the remaining 95% of their civilization is uncovered, Mayan culture can be considered the Egypt of the Americas in both complexity and scale with many more mysteries to be discovered. It continues to defy our modern world's perception of ancient civilizations with every find. On top of the fact a very small percentage of ruins have been excavated, researchers and archaeologists must also work to understand each discovery. Ancient sites such as Tulum, for example, suggest there is much more to the Mayan story. Given the scope of knowledge already documented, it is very possible that once forgotten technologies may be rediscovered in the future, for the benefit of all mankind.