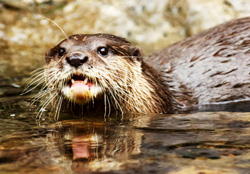 It lends merit to why more sightings have occurred in the past century than ever before. The giant otter, for example, is a large animal which fits both descriptions of Columba's water monster and modern Nessie sightings including photographic evidence. Encounters in the past couple hundred years have sometimes been attributed to common otters who are known to live in the Loch Ness area. We know average sized otters are capable of making this area their home. What about this possibility of giant otters moving in on the territory?

Firstly, populations of giant otters generally span from central to north Africa, some distance from Scottish locks, but that could be changing due to recent human impact. Giant otter are steadily at increased risk of extinction due to over-hunting for pelts and food. It's possible groups of giant otters are slowly being pushed further and further north over human activity, perhaps even finding their way through the Mediterranean coastal waters, or inland rivers over time to reach northern parts of Europe. Life on Earth adapts for survival instinctively and it wouldn't be surprising to see a species to relocate if they're constantly undergoing significant threats to their survival. Giant otter are carnivorous and territorial, they would not hesitate to demonstrate aggressive behavior especially if confronted by humans, just as described in the Saint Columba case. Average giant otter sizes range from 4.9 to 5.6 foot long body length with a tail reaching up to another 2.4 feet.

Reports in Africa suggest males are capable of reaching a length of at least 7.9 feet, and with the tail we're looking at a pretty large creature here. Along with the size of giant otters, they also share a unique ability as their smaller cousins, periscope behavior. When a giant otter periscopes, a decent portion of their body is out of the water, giving the look of a long narrow trunk or neck. Their heads are smaller in relation, just as a Little Ness might indicate. Short, webbed feet of the otter may sometimes give a flipper-like appearance, also described in some Nessie reports. Also, there are Spanish names for giant otters that draw close resemblance to Scottish and Irish lore. The Lobo De Rio (River Wolf) and Perro De Agua (Water Dog) both fit water devils and monsters.