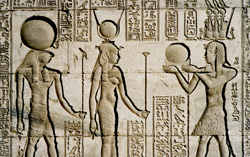 Belief in an alternate existence, or other-world, have long been a part of human nature. For as long as historical record traces back, and then beyond through oral tradition, mankind has constantly looked to other realms to explain our own existence. There are many reasons why anyone might find worlds beyond current reality as comforting and fulfilling. It seems we are spiritual by our existence, through our consciousness, without doubt a type of extra sensory perception to say the least. In essence humankind believes in a multitude of spiritual concepts.

From gods to deities, souls, ghosts, aliens, superstitious encounters, cryptids, the unexplained, paranormal activity and supernatural events. When assessed as an entire collective, and without segregation of the masses, we find uniquely it's quite common and essential for human life on Earth to believe (on some level) of something beyond known physical realities. Even those who support a neutral standpoint, believing in the absence of any higher level being, still have a belief system which defines them. From here we congregate by establishing relationships with others who share the same beliefs, even so far as to keep our distance and/or slander those who's beliefs are too unlike our own.

Through this process we make ourselves different even if in spirit we are the same. The broad diversity of belief systems throughout the world is largely due to cultural influence yet no matter how each culture explains our existence, the same basic principals permeate through the fabric of society. One of the more predominant concepts evident in several cultures concerns itself with an idea of life after death, often portrayed by souls or spirit entities with an ability to affect the physical world in some form or another. Where life goes after passing on is one of the greatest mysteries of being human. Incidentally, science may corroborate spirituality in this sense by physics and the law of conservation of energy. We are made of energy, and if energy cannot be destroyed, where does our energy really go when we die? This principal can be applied to birth in asking where did the energy come from that created us? Surely the physical part of our energy is dispersed back into the environment, but that doesn't necessarily include our consciousness or soul for that matter.