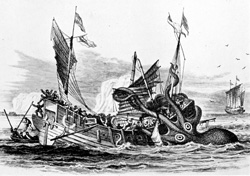 Discovering cryptids in the oceans might be much more likely due to these numbers, there are simply more places for these legendary creatures to hide and remain undetected. In fact, that is exactly what the fabled colossal squid is believed to do. For ages colossal squid were believed to exist but never proven aside from encounters near the ocean's surface and partially decayed biological matter found washed up on the world's beaches.

Many stories over the years detailed events with giant squid including mentions by Aristotle, but only myths and legends dared to mention something even bigger, the colossal. A discovery in 1925 uncovered two colossal tentacles found in a sperm whale stomach, linking the two animals together while providing initial proof these massive creatures do exist. In 2007 legends turned to reality as a New Zealand fishing vessel captured the largest known intact cephalopod in recorded history, weighing around 990 lbs. while measuring 33 foot long. Characteristics of colossal squid are nearly identical to giant squid except they have a wider and shorter body with tentacles featuring swiveling hooks theorized to be responsible for scar marks commonly found on sperm whales. The whales have long been known to feast on octopus and squid from partially digested remnants found in carcasses.

Dissections have also found squid beaks larger than the monster netted in 2007, highly suggesting much larger colossal squid exist. In July 2012 a broadcasting company called NHK and the Discovery Channel successfully filmed a giant squid for the first time in history estimated to be around 23 foot long diving just south of Tokyo. According to the Smithsonian the longest giant squid on record measures 43 feet despite rumored lengths, but this does provide interesting clues to the idea of a Kraken or similar type of giant sea monster.