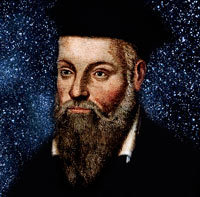 The prophetic works of Nostradamus are well-known around the globe for uniquely distinct characteristics and eerie correlation to future and past events. Michel transformed his literary world with ten centuries of quatrains, and epistle to a king, and two series of almanacs written in visually cryptic ways. By communicating this way Nostradamus sought to keep secrecy from the Church and to reduce or prevent accusations of sacrilegious behavior in a time in the Tudor period when torture, imprisonment, and even death were all very real possible outcomes.

At the time Nostradamus could have been tried for the study of alchemy if found out to be practicing magic. In his earlier years, work as an apothecary lead to debarment from school, but this only strengthened cravings for the study. It is fair to assess that Michel sought ways to involve himself in healing and contributed to acceptable activities including combating plague outbreaks after losing his first wife and children to disease. Perhaps the struggle showcases Nostradamus' underlying moral fiber further by his unfettered healing study which continued to grow over the years.

In time, Michel's passionate dedication to chemistry developed into practices the Church perceived as occult magic in nature, and so too he developed a fear of persecution. The moral remained however and Nostradamus sought ways to help others beyond religious doctrine through astrology and private alchemical study. His prophecies and horoscopes were soon in demand after publishing the 1550 almanac and notable figures began requesting Michel's psychic advice.

As a seer Nostradamus published several almanacs and centuries of quatrains for which he is most known for today. The stanzas are indeed cryptic, and highlight the threat of heresy, though they're often associated with world events by the way in which they're written. Nostradamus quatrains may visually connect elements to current events as a matter of interpretation even when the subject refers to something different altogether. There are many theories behind this prophecy mechanic in action, and how it relates to human interpretation, but it is the eerie relation to future events which grabs ahold of most.

Potentially it is the practice in how Nostradamus wrote predictions contributing to mysteries behind them. Scholars who have extensively studied Michel's work and life draw attention to the alchemical practices he barred from the public for his own protection. For example, there are indications Nostradamus worked with scrying methods to foresee future events and then used those results for quatrains. With a bowl of still water lit by a single candle, a hallucinogenic substance and hours of staring into the bowl, Michel would peer into a spiritual realm for answers to his thoughts.

In fact, Nostradamus describes this process in a missive to Henry II:

"While I was seized with this singular desire to be transported suddenly from my long-beclouded obscurity to the illuminating presence of the first monarch of the universe, I was also long in doubt as to whom I would dedicate these last three Centuries of my prophecies, making up the thousand. After having meditated for a long time on an act of such rash audacity, I have ventured to address Your Majesty."