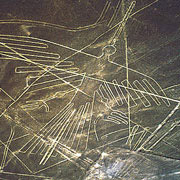 Found in the desert of Peru, the Nazca Lines are composed of large scale geoglyphs which seem to only make sense by looking at them from the air. The nature of the glyphs leads one to believe the Nasca, who inhabited the area between 200 BCE and 700 CE, were either flying themselves, or witnessed others flying, if they were the creators by association. It's interesting to note Nazca's proximity to the ancient Quimbaya culture who created several gold sculptures which resemble modern airplanes and insects. There possibly might be a correlation between Nazca and Quimbaya artifacts, just as their artworks on ceramics and textiles share depict similar religious rituals. Archaeologists have yet to precisely identify who built the Nazca lines.

Over 15,000 animal shapes and geometric patterns fill a relatively flat landscape, including lines which appear to be runways or landing strips. Since the desert plains here are mainly composed of rock and stone material, the creation process involved moving the top layer over several miles for each glyph to create a contrasting design. Precision used here indicates complexity far beyond that of simply drawing a big enough line in the sand by dragging sticks. The accurate construction is matched with equally precise solar positioning as demonstrated by a select number of glyphs pointing directly at celestial locations. Although the Nazca lines are most identifiable from the air, it's believed their design first was created on pottery and developed into large scale models. Careful planning and an accurate measuring system could achieve a similar effect compared to aerial surveying.

The purpose of the Nazca lines is as mysterious as their presence. Understanding how an ancient culture was motivated to create these large artworks, and then use them, creates its own set of questions. One big idea discovered recently attributes the lines as pathways along a spiritual journey. The rock along the open paths appears to be compacted as if used for some sort of travel route. Broken pottery shards discovered on each side of the major glyphs indicates a type of ritualistic process, and the length of the lines might suggest an alternative use. One of those possible uses includes the rite of passage. For example, past cultures that lived near Nazca could have used tantric concepts such as repetitive music and behaviors while ingesting mildly toxic substances to enter a trance-like state intending to communicate with the gods. Some researchers believe the Nazca lines might be evidence of the pathways these cultures might have once used in order to achieve a higher level of consciousness by the tantric method. The lines provide plenty of walking room and provided a path following a sacred shape - Perhaps Nazca inhabitants found a way to communicate directly with their deities.

The Band of Holes 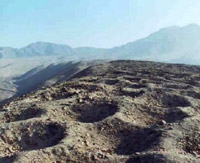 Also located in Peru not far from the Nazca Lines, one can find an unexplained ridge section in the mountain foothills known as the band of holes. On the Cajamarquilla plain, an estimated 6,900 man-sized holes carved into the stone stretch the plain, with no related archaeological evidence found to date. Multiple theories have surfaced suggesting how they were created and why. There are certain characteristics which lead researchers to believe the band of holes was made by people to store food crops or for use in ancient burial rituals. Some theorists have even purposed the idea of a primitive type of machine used to create the phenomena.

A final idea proposes environmental influence, as a completely natural formation, resulting from larger forces at play. For now, the truth behind these mysterious divots remains a mystery.