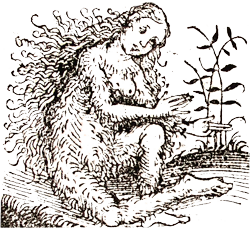 This environmental constraint is even evident in current human population. People living in less dense populations are on average taller than those living in more densely populated areas. If these cryptids really are part of a continued line of Homo erectus, perhaps living in large forests and marshy areas for thousands of years contributed to specific genetic changes, resulting in a larger forest adapted type of human we call, Bigfoot.

Some theories also propose Sasquatch are actually just misidentified modern humans who removed themselves from mainstream society to live in the woods sometime within the last few thousand years. New age theorists even propose the possibility of people living in current society defecting into the wild to be free of their burdens and free from the demands of modern life. There are few notable examples of such individuals. We know it happens, rarely, but we don't know exactly how many times it happens. A problem with this theory is trying to explain how AWOL folk continue to survive so evasively, and exactly how modern people could take on the appearance of Bigfoot in a seemingly short time.

One idea considers how domesticated pigs quickly develop a thick fur, grow tusks, and revert to primitive survival traits when left in the wild, incidentally becoming fully environmentally efficient in just a few short generations. This transformation for humans is largely unknown to modern science, and the majority of what we do know is thanks to those few individuals who have tried it with public knowledge only to meet an unfortunate end. It also doesn't take into consideration common details from Sasquatch sightings such as being 7 foot tall, leaving large foot prints and sometimes traces of unknown DNA in hair samples. Another hypothesis points to a rare condition called Hypertrichosis which causes abnormal hair growth over the entire body. Stephan Bibrowski was one of the more famous people with this ailment, growing hair up to eight inches thick over his face and around four inches thick around his body. Bibrowski performed in the circus making the best of his condition, but unfortunately people who are affected by Hypertrichosis do not always have this type of reaction. Certain legends in Europe claim werewolves are real people affected by the syndrome, living out in the wild, taking their revenge on society for its ridicule.