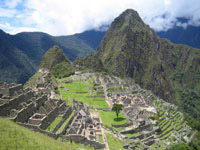 Machu Picchu construction began around 1,400 CE but was abandoned during the Spanish conquests, incidentally keeping the location a secret until modern discovery in 1911. The entire ancient city, built in the mountains of the Cusco Region of Peru, which the Inca hold scared; A practice called Sacred Geography by Johan Reinhard. Around 140 structures are found throughout built using a technique the Inca mastered called ashlar, mortar-less brick building. Stone alignments were detailed in ways to help prevent structures from collapsing during an earthquake, which evidently helped the entire complex stand the test of time.

Some of the stones were left with knobs that would later be removed after positioning, evidence of how they moved the much larger and heavier blocks weighing 20-50 tons, up hill, remains a mystery. Intricately carved ritual stones called Intihuatana have been described as a sort of astronomical clock, marking the obliquity of the ecliptic, while the northern hemisphere is inclined toward the sun and the southern hemisphere is not. The Intihuatana line up specifically so that no shadow is cast on the stone on March 21st and September 21st the two dates marking the obliquity.

Constructing such a magnificent city on top of a mountain plateau is an incredible feat even to this day. A driving force may have very well been the Spanish invasions, but there is reason to believe the location was chosen due to its sacred geography and alignment with celestial bodies in the heavens. Walking in this ancient city is absolutely breath-taking in both beauty and magnitude. Vantage points into the valley enabled the Inca to quite literally see all around for miles. Machu Picchu is a truly sacred place, and almost resembles that of a real version of Shangri La.