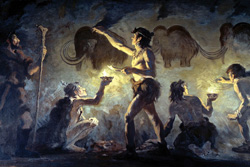 Unless of course, human species really date back much older than any skeletal evidence ever found, or that a few populations of dinosaurs survived a global extinction event and then proceeded to survive for another 63.5 million years in time to live with people; Or dating methods using these techniques are simply inaccurate for both humans and dinosaurs. Some archaeologists are skeptical over claims one catastrophe actually wiped out all dinosaurs as we know it. This brings about questions regarding which ancient animals survived through it, where did they go, and where can evidence to prove it be found. Certain artistic works of ancient cultures seem to portray the last known time periods when a few remaining dinosaurs lived long enough to see humans, and ancient mythologies of dragons add further notion to the concept. Our ancestors clearly described dragons as we currently describe dinosaurs; The question remains. Where did our ancient relatives get the idea of a dragon?

Modern theories suggest dragons were merely crafted through imagination while observing well known creatures existing at the time of our ancestors, but recent studies indicate another method is quite possibly responsible for the birth of drakons in ancient lore. Suppose our distant relatives stumbled upon the skeletal remains of a dinosaur at some point. After seeing skeletons before in their lifetime, they likely would try to determine what creature the skeleton belonged to, undoubtedly attaching a story of some sort along with it - Similar to the process of discovery modern society goes through.

Now imagine our ancestors happened to find the skeleton or skull of a carnivorous dinosaur such as the Tyrannosaurus. What kind of stories could a dinosaur skull inspire to our ancestors? The Ica stones and other artistic works depicting dinosaurs may truly be depictions of real dinosaurs, except based on their skeletal form instead of the flesh. It's a theory that inadvertently connects several dots across the board and can be corroborated not only in dragon specific mythologies, but also in the mythologies of other creatures too. Theorists believe ancient discoveries of dinosaur fossils inspired legends of ogres and griffins, and the same may also hold true for dragons. Official taxonomy of dinosaurs only began in the 19th century - Animals whom these bones belonged to could only be imagined prior to the class separation.