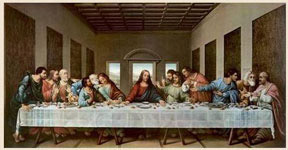 The cup Jesus drank from at the Last Supper, the sacred Holy Grail is arguably the most sought after religious artifact next to the Ark of the Covenant. Legends of the ancient Grail's existence have been steadily fueled over the centuries by ongoing quests to locate it. Some have even speculated the term Holy Grail was really a metaphor and doesn't refer to a physical object. Still, many have searched in hope they may have a chance to hold the most divine of sacred relics. Popular theories base the Grail's whereabouts to be secretive, passed down from generation to generation, changing hands only when the time is necessary.

Officially endorsed by the Roman Catholic Church, The Knights Templar have long been suspected of knowing where the Holy Grail is kept. Rumors have placed the Knights in key locations during the Crusades with individuals claiming to have witnessed Templar digging and searching for holy relics while they occupied the Temple Mount. These mysteries have long tied the Templar to relics like the Holy Grail, Ark of the Covenant, and the shroud of Turin. Theories suggest that when the Holy Land was lost, many Templar faced persecution and several went into hiding along with the these sacred relics, they claimed to be protecting. It's believed the Order's efforts to keep the relics a secret were very extensive, to the point of using cryptic messages in communication and elaborately constructed buildings to hide them in. Many stories about the quest for the sacred chalice often involve decoding signs and messages left behind by the Knights Templar.

Where is the Holy Grail?

Prominent mysterious constructions such as Rosslyn Chapel and Oak Island are believed to be secretly housing the Holy Grail or the Ark of the Covenant. Even though either location would indeed make an excellent hiding place, conclusive historical evidence is lacking to place either relic to those locations. Then again, many relics and valuable items have been buried for protection in the past and it is not out of the question to think those hiding the Holy Grail would have worked extra diligently to keep it from falling into the wrong hands. From time to time certain individuals claim to either hold or know where the holy grail is yet they're unable to provide proof to their claim. Small ointment vessels recovered from ancient religious sites are sometimes mistaken as the grail and usually don't resemble the power, mystique, or presence the Holy Grail is normally tied to - As that of shimmering gold perhaps with jeweled inlays and intricate designs fit to carry the wine and blood of the holy son. Perhaps otherwise, artistic representations of the grail are instead false to display a fine polished metal chalice as a vessel surrounded by ethereal light; If it were nothing more than a hand-carved ointment jar toasted at the last supper.