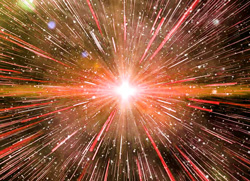 Science defines the universe as the result of tiny dense point exploding in the night sky around 13.7 billion years ago. The singularity before its presumed violent paroxysm measured roughly the size of an atom. A highly compacted object sets off a chain reaction, lasting only fractions of a milliseconds, and ejects all known existence from an immense blast. For sake of simplicity, science appropriately named the event as the big-bang.

Cosmos in their entirety were born as fallout stretched far beyond the detonation point in all directions like an infinitely large ever-expanding balloon, with nearly limitless capacity, rapidly inflating over an immeasurable distance. Wake from this super cosmic wave facilitated creation of galaxies, planets, particles, star dust, and countless unexplained byproducts.

Everything we're aware of was called into existence with a force so immense that even gravity formed to create a basic framework for life to build upon. Include many bazaar exotic forms of reality which we have yet to discover along with realities we only have an inkling of existing, and the universe becomes so unbelievably large that language struggles to describe it.