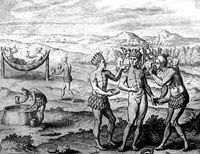 The legendary lost city of gold, El Dorado legend originated in the Muisca territory from Spaniards who were told of a ritual at Lake Guatavita where treasures were thrown into the lake as offerings for the new king. Attempts to drain the lake for unimaginable wealth took place until finally abandoned after many of the workers died and, no treasure was ever discovered. Stories then developed over the ages transforming the idea of discarded wealth at the bottom of a lake into an entire lost city of gold according to some theorists. El Dorado became a fixation for many explorers, some who lost their own lives in pursuit of an epic treasure.

Recent satellite technology might actually be changing the notion of El Dorado altogether, transforming it from a mythical city of legend into a very real location. A discovery of over 200 earthen works found near Brazil's Bolivian border is thought to be in a promising location for the lost city of gold. The earthworks hint at an extremely sophisticated civilization inhabiting the area between 200-1283 CE. This ancient city's inhabitants are currently unknown yet the specific location, building configuration, and architecture resemble descriptions often referred to by El Dorado hunters. Explorers continue to scour remote areas of South and Central America in hopes of discovering the lost city, using ancient texts and local legends to help guide them to the right destination.

The trouble with finding this mysterious city is largely due to exactly how knowledge of its existence came to be. We know the Spanish were invading the area, destroying and pillaging the Inca, Aztecs and Mayans in the process. Conquistadors searched the new world for gold, silver and jewels to bring back to Spain. They followed a strict Christian belief system which viewed acts of South American cultures to be works of evil, largely because these systems were misunderstood at the time. A number of theories suggest El Dorado might have been a distraction tactic by the Inca, to send the Spanish elsewhere, protecting Incan interests in the process. Others believe the mysterious lost city of gold could've been created by a Spaniard, in attempt to justify future visits to the Spanish government while detracting from what might have been considered a botched expedition. We know both ancient cultures in South America prized gold and accumulated vast amounts to appease the gods, and a large portion of this has been unaccounted for over the centuries. Is it possible thousands of gold artifacts were not seized by the Spanish, and perhaps hidden in a secret location we might consider as, the lost city of gold?