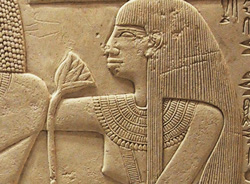 Ancient Egyptians believed water is the source of all creation, to the point they often depicted those in the afterlife drinking from SHE, or a pool of water. Many motifs around Egypt also depict the SESEN (Lotus), an aquatic flower symbolizing birth and dawn as it rises from the water every morning and descends at night. Adapting to the harsh conditions of desert living could only prove successful if the culture was able to maintain an adequate supply of water.

Pyramids around the world share many common elements from an architectural standpoint as well as the use of megalithic blocks for their construction. Many rest in proximity to a fresh water source, something which humans cannot live without. Is it possible these gigantic structures provided much more for ancient civilizations than meets the eye? The Great Pyramid of Giza, for example, does not contain hieroglyphs or artistic decorations inside yet archeology tells us the Egyptians built it as a tomb for Pharaoh Khufu. Why would the ancient Egyptians built such a large testament to a Pharaoh with only a few scattered inscriptions on the structure? Perhaps there is more to the mystery of the pyramids, and it might be a very simple explanation overlooked due to their complex nature.