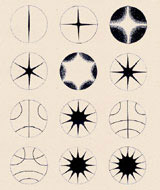 Visual reference to sound vibrations is credited to German physicist and musician Ernst Chladni who used a violin bow, metal plates and sand to produce different patterns based on specific sound frequencies in 1787. His discovery proved sound does affect physical matter and is capable of creating representative geometrical patterns. Though Chladni is attributed to the visually demonstrating sound's affect on matter, there are a few historical accounts that may prove this auditory science to exist long before his time. Rosslyn Chapel, for example, features several intricately designed cubes theorized to be musical in nature, perhaps even capable of unlocking secret mysterious knowledge. Ancient Egyptians and Chinese cultures both mention similar practices inadvertently extending the known time-line regarding the geometry of sound.

American mathematician Nathaniel Bowditch and French mathematician Jules-Antoine Lissajous both spent a significant amount of time studying the results from Chladni's experiments and determined independently that frequencies were the condition responsible for patterned designs. Jules-Antoine then perceives the variations in shapes are due to phase differential. Two hundred years after Chladni's discovery, scientist Hans Jenny published a work called Cymatics - The Structure and Dynamics of Waves and Vibrations. Ernst's experiments were reproduced in further depth using crystal oscillators and his coined tonoscope. With the tonoscope, a human voice could be visualized directly on metal plates without an intermediate link. Modern Cymatics experiments with water and liquid-based materials such as a cornstarch mixture beautifully display how sound affects physical matter. Although the science may appear as a newly discovered phenomenon, it roots deeply among a variety of civilizations and their understanding of our physical existence through the power of sound.