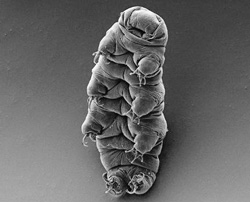 If select species of dinosaurs were capable of this type of survival behavior, to remain dormant for thousands of years in a state of suspended animation, it seems much more plausible eyewitnesses have encountered true relics from ancient times living in a modern world. Are there any dinosaurs capable of maintaining a cryptobiotic state for millions of years though?

According to Cryptobiosis theories, it might happen provided conditions in which an animal entered this state remain consistent for the duration. Otherwise, the animal would enter and leave its Cryptobiotic state each time as conditions fluctuate enough to trigger it, possibly harming the creature. Dinosaur biology is tricky to determine considering living specimens are not available. Scientists have limited evidence to go by in determining all biological factors contributing to the full life of a dinosaur, and it will take many more years of research to determine if any of Earth's larger ancient species were capable of similar hibernation or Cryptobiotic states found in plants and animals of today.

Perhaps further study of modern cryptobiotic capable creatures will shed light into this mysterious realm of animal biology. Advances in cryogenics technology and cryobiology are pushing the limits of biological survival for extended periods of time, which provides valuable insight into the potential of finding more recent living dinosaurs frozen in glacial ice for many thousands of years.