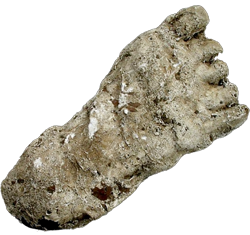 Explaining eyewitness testimonies may not be easy, but this evidence is enough to warrant full scale investigations as the BFRO and other organizations are performing to find and/or capture a Sasquatch themselves. Since these Sasquatch are very elusive, maybe it might be wise to tag and track, instead of hauling it in live or dead for studies. Radio tags, maybe even miniature video transmitters could tell us much more about behavior, living conditions, and survival in the wild.

Largely contesting existence of Bigfoot by skeptics are questions which ask why it's too difficult to find any biological remains of the creature. There are a few probable answers beyond typical responses if indeed Bigfoot is in the line of Homo erectus. Generally field researchers quickly counter a lack of bone remains is due to scavengers, or decay rates of matter on a dense forest floor. Of course these are plausible explanations but they're geared to looking at Bigfoot strictly as some sort of wild animal. When we look at Bigfoot as a Homo erectus, or Homo habilis, we find a different story altogether.

According to some anthropologists, cannibalism dates to early periods of human history which is partially corroborated by archaeological evidence found in ancient Neanderthal remains. This dates to after the habilis and erectus period yet doesn't necessarily mean it wasn't practiced before then too. There are many reasons for cannibalistic practices that often centralized spiritual belief and these acts also happened in times of severe hunger in order to survive. Among techniques discovered for this practice we find at least two that could contribute to a lack in Bigfoot remains if funerary cannibalism is part of their survival.

Burial and bone crushing, both of which leave little structural elements behind to indicate they were once bones, much too obscure to be found commonly in thick forests. Burial seems to be the more likely scenario of the two, drawing even further parallel to modern human living. A third possibility could be cremation. It's not unreasonable to consider these humanoid cryptids as opportunistic, they may very well take advantage of naturally occurring fires, although open fires are extraordinarily rare in eyewitness reports as the majority of time Sasquatch appears to be in traveling mode.