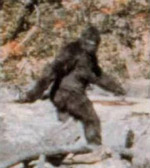 Legends of large hairy humanoid creatures lurking in the backwoods of the world isn't a modern phenomena by any means. Our ancestors have documented encounters in their stories and oral traditions for hundreds of years with some beliefs orientating thousands of years ago. Science tells us that modern humans have descended from Homo habilis, Homo erectus, Cro-Magnon, and Neanderthal over millions of years and we know that during these periods there would've be times when divisions in species likely coexisted. As distant relatives branched off, evolving into modern humans, perhaps some of them became isolated or chose to separate for survival. Could Bigfoot sightings really be promising insight, that our flesh and blood relatives still roam the Earth?

Many eyewitness accounts describe creatures who fit closely with one ancient ancestor in particular, Homo erectus. Archaeological record indicates Homo erectus retained many ape-like features and lived between 500,000 to 2,000,000 years ago. They walked upright, were hairy, and did not wear clothing as many modern sightings also indicate. Clothing factors are significant, as with common behaviors attributed to Sasquatch such as throwing rocks, banging on wood, and arranging sticks in patterns. These concepts help emphasize the possibility of Bigfoot being a direct descendant or actual new generations of Homo erectus. Since Homo erectus survived on the planet for nearly 1,500,000 years, it's not unreasonable to think they'd be able to survive for another 300,000 years into present day. Maybe Sasquatch and Bigfoot are so elusive explicitly for this reason, millions of years of experience living in the forests and caves. So far we've only discovered trace evidence, heard unknown vocalizations, and discovered unknown strands of DNA aside from first-hand encounters. Independent researchers and organizations are working to change this by discovering Bigfoot in the flesh.

Undoubtedly one of the most famous, legendary cryptids around the world has to be Bigfoot by in part to countless eyewitness reports, video evidence, foot prints, audio clips, and even DNA findings. The amount of sightings and fragmented evidence suggesting some type of tall hairy humanoid creature exists out there is truly overwhelming. Their resemblance to humans is striking in many ways - Imagine if the Sasquatch population turned out to actually be our living ancestors!

Although the name Bigfoot is traditionally attributed to the North American area, we find numerous accounts of near identical creatures roaming the wild in other parts of the globe; Each area tends to have its own specific native name (and lore) used for referring to these creatures. It comes to no surprise for many trackers and researchers attempting to make the physical discovery that Bigfoots do exist considering evolution of human population alone. Our ancient ancestors branched off from their origins in Africa to settle the world over. Many contributing factors may suggest how Sasquatch is indeed part of our species, breaking off from mainstream groups to survive away from society.

Descriptions of the legendary cryptid, Bigfoot, point to a confusing mixture between Homo habilis and Homo erectus. Archaeological record demonstrates our ancestors did not begin to live in groups or wear clothing until the Neanderthal age, around 30-100 thousand years ago. The record also portrays a transition period when both Cro-Magnon and Neanderthal coexisted, just as Cro-Magnon and Homo sapiens later in the time-line. Mixed traits between the latest two have even been discovered in Portugal, dating to nearly 25,000 years ago. As our ancestors spread around the globe, and started to live in groups together, it doesn't seem out of the ordinary that some of them may have split off during these transition phases. Suppose part of Homo erectus population continued on by themselves during formation of the Neanderthal period, deciding not to wear clothing or live in larger groups, or simply that they were too far away from the groups to pickup this evolutionary change.