The only existing written records referring to Atlantis are Plato's 360 BC dialogues Timaeus and Critias. In the dialogues, Critias and Timaeus entertain Socrates with a story that is "not a fiction, but true." Timaeus describes the creation of the world and explains natural phenomena while Critias talks of a lost island, its people and ancient Athenians.

Though only briefly mentioned in the Timaeus dialogue, Critias talks of Poseidon possessing the island of Atlantis. The island is described having a very fertile plain and "not very high mountain" in the center. Two springs, one warm and one cold. The extremity of Atlantis facing the country of Gadeirus. An abundance of wood, a great number of elephants. Bridges over the seas which surrounded and parted the ancient metropolis with a road directly to the royal palace. A harbor and docks on the outer zone for sea passage. A zone cut from the sea, then a zone of equal land, a zone of water and land and one surrounding the central island. Quarried white, black and red stone built walls, towers and buildings.

Each zone wall is coated; The outside most wall in brass, the next with tin, and the third (citadel wall) with orichalcum which is thought to be a gold-copper alloy tumbaga. Around the temple were golden statues of the 10 kings and their wives. The two springs fed aqueducts along the bridges to the outer zones, distributing water along the way. In the center of larger of the two islands (apart from the center Temple of Poseidon island) a race course for horses extended around the island. All surrounded by a level plain, surrounded by mountains descending toward the sea, oblong in shape. Canals were cut and interconnected from the mountains to the city of which wood and fruits were transported. Note that at the end of the known Critias dialogue, Zeus gathers all of the Gods into their most holy habitation placed in the center of the world for a speech. The remaining Critias dialogue was lost or never written and there is no evidence of what Zeus spoke to the Gods.

Atlantis is arguably the most prominent story of the ages. Many explorers have tried to uncover the location to show the world a most profound discovery. Some theories even suggest the island will rise from the sea in the time of Armageddon. Ancient underwater ruins found in several places across the globe continuously spark the question whether or not they're a part of the legend of Atlantis. Sources are credible and the hunt continues. One day the island once described in Plato's dialogues might prove to be "not a fiction, but true." 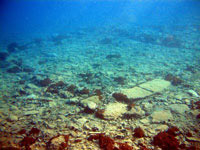 The city of Pavlopetri off the shore of Laconia, Greece is believed by some as Plato's inspiration for his dialogues speaking of Atlantis. Pavlopetri is the oldest submerged city discovered and investigated thoroughly, with many examples of buildings found in the Greek mainland. It's believed the city was home to Greek royalty, gods and heroes from evidence uncovered throughout the 30,000 square mile site. Estimations date Pavlopetri to around 2,800 BCE and 1,100 BCE during the Bronze Age. The problem so far with claiming Pavlopetri to be the Atlantis Plato spoke of, is that the structures and landscape found do not resemble those described clearly in the dialogues.