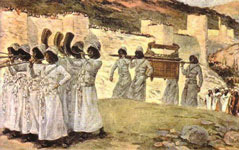 Prophet Jeremiah spoke of a time when the land is filled with people; the Ark of the Covenant will no longer be talked about. Even thoughts of the Ark would not enter anyone's mind. Present day seems to follow suit with the land being filled, but there are many who still talk about, research, and are tempting to find the Ark of Covenant. Given the mystery and legend behind this sacred relic, what possibly could cause a land full of people to have no recollection? Does Jeremiah's prophecy instead refer to the Ark's original location, somewhere in that vicinity?

According to a vision on Mount Sinai in the bible, God commanded Moses to construct the Ark of the Covenant to house sacred tablets of the Ten Commandments. This profoundly means, finding the Ark means finding those sacred tablets as well. Biblical accounts suggest the Ark provided a direct communication with God especially in situations where it's documented to have a great deal of power over conflict. The book of Joshua talks about the destruction of Jericho by rams' horns after the Ark was paraded around the city for seven days. Also, the river Jordan was parted by the presence of the Ark.

Several accounts, and some found in the Bible, describe the adverse effects of the Ark, almost as if though it might have been radioactive on some level. In the book of Samuel there is specific reference to people begging Philistine rulers to send the Ark back to its own country before it destroys everyone; the hand of the Lord was heavy and devastated the people of Ashdod with tumors. Further references claim those who touched the Ark died instantly or shortly after.

The last known resting place on record is believed to have been around 650 BCE, at Herod's second Temple in Jerusalem. A copper scroll found in 1952 near the same cave area as the Dead Sea Scrolls suggests the Ark was among the sacred objects listed to reside in the Temple until its 70 CE destruction. Similar to the Holy Grail, many explorers have searched meticulously in hope of discovering the Ark and its unfathomable power, even going to great depths to secure it. For example, studies of the mysterious tunnel system on Oak Island have revealed elevated levels of radiation suggesting the reason for building such an elaborate hydraulic system was to protect and hide the Ark of the Covenant, especially if it was a radioactive device.