Euhemerism is a theory named for a 320 BCE mythologist who claimed that myths are really a distorted reality of past events believed to have taken place. Euhemerus' idea hints that through the years, stories become stretched similar to a tall-tale fish story. Some theorists also believe myths are over-glorified accounts of a person who made such a profound impact on their culture, their story would live on throughout the ages for all to know. Most of the time, myths involve supernatural events or objects unfathomable to exist even to this day. Although many of the stories and fables are just that, it's interesting to purpose the idea of Euhemerism relating to the incredible devices and armor at the disposal of mythological stars. One reason why this topic is surfacing in modern times is due to the amazing leaps in technology over the last hundred years.

Arguably one of the most famous Greek Olympians, Zeus (known to the Romans as Jupiter) the God of Thunder, carried a thunderbolt capable of destroying entire cities in a single throw. Similarly, the Lord of Heaven and mountain god, Indra, who in Hindu mythology was known for his device called the Vajra, or thunderbolt. Interestingly enough, the story takes a twist. Kongo is the Vajra equivalent name in Japanese, but for the trident-shaped staff which belonged to Koya-no-Myoin, a Japanese mountain god. Three cultures who share the concept of an ancient device known as the thunderbolt, capable of mass destruction. Then, as the Kongo emits a bright light to give man wisdom and insight, its power transcends cultures once again, to the Norse god Thor. His destructive hammer, called Mjollnir, symbolized lightning too, but there is a problem. Thor required iron gloves and a belt of strength to wield it. Modern day science tells us that iron gloves would probably conduct the electricity instead of projecting it outward. There is a possibility the gloves indicate why his hammer would return after it was thrown though the type of technology swims in unknown waters for now. Maybe there is more to the Thor story that wasn't passed down or it was intentionally left out, perhaps not considered as crucial to the overall moral.

As with many mysteries in ancient oral tradition, perception of those who passed stories down through the generations, mythological devices of destruction distinctly demonstrate the sheer power of the gods on several levels. Poseidon (known to the Romans as Neptune) the Lord of the Sea carried a trident similar in description to the Kongo, but with powers closely related to the sea instead of the clouds above. His trident is said to shake the earth, shatter objects, and manifest both horses and water spouts. This power resembles current sought after technologies in forms of weather manipulation and is reminiscent of late Tesla research. Tesla claimed to have created an oscillating device designed to tune into structural frequencies, causing those objects to break apart from the vibrations. Witness reports near Tesla experiments talked of the ground and buildings shaking though nothing was proved beyond a doubt to be the work of Nikola. 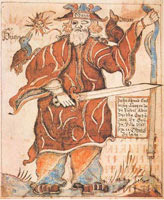 There are other devices mentioned in ancient mythologies which could really exist to this day, lending creditability to the Euhemerism theory. The Norse god Odin and his spear called Grungir was known to never miss its mark. Eerily similar to modern missile technologies that use pin-point laser or heat guided radar to hit targets without failure. Also, Odin's bow shooting 10 arrows every pull could be considered an ancient description of modern rapid fire devices. Even Odin's sword, capable of cutting an anvil in two, is not a far-fetched idea. Apollo's far-shooting silver bow might also be considered a device of the missile launching type except for one issue. His bow could also heal, something of which modern versions are not designed to do. Coupled with the archery are poisoned arrows of Heracles (known as Hercules in Roman), and Ysbaddadan's venomous spears. Both of these present the idea of applying chemicals to enhance their powers.

Lastly, some of the mythological accounts blatantly describe devices of Revelations on a monumental scale, say those of an atom or nuclear capacity. Hindu mythology discusses the Brahmastra. When discharged it creates devastating environmental damage, rendering the land barren in the (fall out) area, where life ceases to exist at ground zero. It causes men and women to become unable to reproduce while decreasing rainfall to the point of drought. The Pashupatastra shares a similar mention except as a device capable of vanquishing all beings, that could be triggered by the mind, eyes, words or a bow. Then there is the Biblical mention of the ark of covenant. A mysterious box used in conjunction with ram horn trumpets to bring down the walls of Jericho - An ancient doomsday so to speak. History notes are decorated with several references of people getting sick or dying from touching the Ark along with many warnings not to touch or look at it. Although these mythologies might lend merit by the Euhemerism theory, science does not have distinguished proof to differentiate these stories from ancient descriptions of factual events.