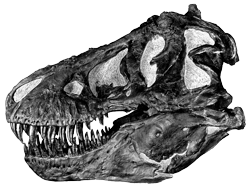 In 2006 a Tyrannosaurus Rex discovered in Montana revealed something never before witnessed and previously thought impossible, traces of blood vessels and cellular structures. Some consider this discovery as smoking gun evidence dinosaurs did not die out entirely in one final blaze. Unfortunately ancient Rex blood and soft tissue doesn't indicate when it died as it only provides evidence blood survived for millions of years as the skeleton is dated. Perhaps the 2006 find opens a doorway to new blood preservation techniques while suggesting that if all conditions (as in the found sample) are met, blood might actually preserve indefinitely.

There is yet another issue when it comes to dinosaur bones. Generally ancient bones are believed to reveal their age by measuring uranium and potassium isotopes of rocks they're discovered in, since bones do not contain necessary elements with a long enough half-life to measure accurately. Using this method is a magnet to skeptical barrage often followed up with Carbon-14 dating, in which case the same dinosaur bones yield a much more recent date when compared to the rocks encasing them. Ineffective Carbon-14 dating methods are often referred in theories of humans and dinosaurs coexisting, but the dating in this manor can be easily contaminated with organic matter decaying in and around fossilized bones. Carbon-14 has a half-life of 5,730 years rendering it only effective on samples no older than 50,000 years, so in essence, measuring the C-14 of a dinosaur bone is great for returning the age of organic matter stuck to its surfaces.