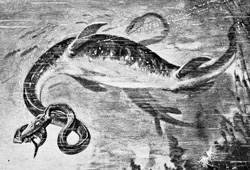 Visual confirmations of Caddy will sometimes involve a multiple-headed creature or heard of creatures. Cryptozoologists have ruled out suspected animals in the area such as moose water crossings and determined Caddy is most likely an unknown species. Prominent features of this sea monster include identifiable webbed flippers, a large fan-shaped tail (like a pipefish), and serpent characteristics. Also like Nessie and Champ, the Cadborosaurus has roots in local native legends reaffirming these sightings are not just modern phenomena.

Ancient encounters with sea monsters have occurred along the United States Pacific Coast, ranging from San Francisco all the way up to Alaska evident by recorded mythologies from the Manhousat, Sechelt and Comox Indians. Further inland, just north of the American Mexican border, the Maricopa Tribe of Arizona references Hailkotat as a sea monster who rewards bravery with its power of strength and to cure illness, transforming a young Indian into a medicine-man. As with legends further up the coast, Hailkotat lore is centralized around a sea-accessible area following the Gila and Colorado rivers, and similar to Lake Champlain, sea animals here would need to travel against the current to make the journey.

Of all the sightings up and down the coast there is one known exception where a legendary sea monster resides disconnected from any ocean body of water. Lake Okanagan is a fair distance from the Pacific Ocean, making it unlikely that an unknown creature living in the depths of the world's oceans found its way there. This lake is located in British Columbia and by local legend is home to Ogopogo (Naitaka by native tradition), theorized by Cryptozoologist Karl Shuker to be a King Lizard from the Late Eocene era. The suggestion by Karl that Ogopogo is an animal believed to have lived approximately 35 million years ago still surviving to this day in a nearly isolated lake is a difficult theory to accept for most scientists. However, Shuker brings up interesting points by referencing Basilosaurus fossils found in Louisiana, Mississippi, Alabama, Egypt and Pakistan as evidence King Lizards were at one point in the area.